The sea — a great textbook of life

As a photographer of marine life, I have been taking photographs and creating videos for illustrated books, children’s educational titles, and TV programs about the sciences for over twenty years. My work base is near Suruga Bay, the deepest bay in Japan on the Pacific coast of central Japan. I also photograph in the seas of the Ryukyu Islands around Okinawa, on the West Coast of the U.S., and in Australia and Southeast Asia.

The theme of my photography is the “Preciousness of Life.” The diversity of life is immense, but people only see a part of it. Even after 20 years of diving and photographing, I am surprised by the new discoveries I encounter every time I dive. I want to share these revelations about the beauty of our world under the sea with as many people as possible.

Why are the shapes and colors of plankton as tiny as a few millimeters so awe-inspiring? It is because the life they embody is in its perfect status — drifting to the flow of the water in a natural environment. I spend about eight hours a day — night and day — underwater, drifting and waiting for that rare moment to press the shutter.

Only the camera can capture the real life of plankton

My shooting method, especially during the night, is to use a fast shutter speed controlling the Depth of Field at fractions of millimeters, always paying attention to the movement of the water around the tiny shooting objects. The stunning shapes and colors and constantly moving fins and cilia of the miniature sea creatures I witness, reveal an ability to adapt to their environment for the sake of survival. My mission is to capture through my photography this secret world that cannot be seen by the naked eye.

Until recently, exposure for my photography and publications had been limited to people in the field of science. I realized I wanted to expand the audience for my photography so more people could learn about plankton and other wonderful creatures of the sea that I have had the privilege to document for several decades. I entered the Nikkei National Geographic Photo Prize in 2016, and I was so happy to win the Grand Prix Award. Now I am determined to continue to use my photography to convey the mystery of marine life and its unimaginable beauty. 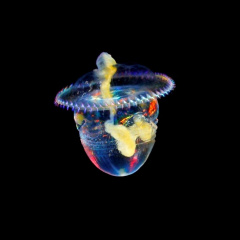 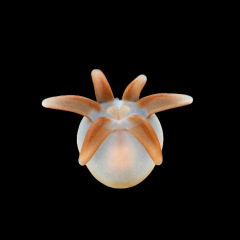 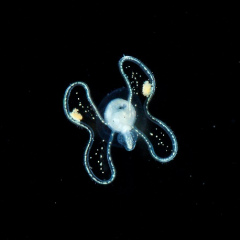 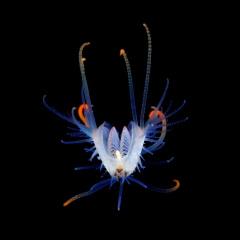 A larva of Limidae (similar of bivalve)